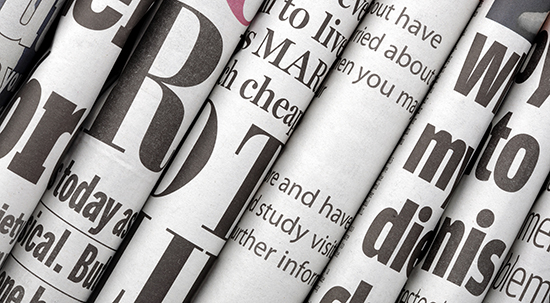 Anticipating a flood of personal and commercial bankruptcies in 2021

Author Joseph Brusuelas, The Real Economy Blog (November 23, 2020) – The roughly $3 trillion in pandemic aid pumped into the economy in the spring worked to such an extent that it most likely prevented an increase in personal and commercial bankruptcies. But that is likely to change as the long shadow of the economic shock causes firms and individuals to turn to the courts for a fresh start through the shedding of debt.

For many firms regardless of size, next year will be a time of bankruptcy, consolidation, reconstruction and reconstitution. The prospect of more bankruptcies also implies that private equity will play a role in a consolidation that will sustain the recent surge in M&A activity.

Despite the shutdown of the economy and the enormous loss of employment, filings for personal bankruptcy dropped considerably during the pandemic. Commercial bankruptcies also declined slightly through the first three quarters of the year. But with the resurgence of the pandemic, the risk of another round of lockdowns rising and CARES Act-era protections expiring at the end of the year, one cannot discount the possibility of a surge in bankruptcies in 2021.

The unexpected 22% decline this year in personal bankruptcy filings—from an average of 760,000 in the three preceding years—is perhaps explained by the interplay between the typical reasons for personal bankruptcy, the size and scale of the CARES Act and the peculiar circumstances of the pandemic.

According to Peter B. Stein, a Minnesota-based bankruptcy attorney at Gislason & Hunter LLP, governmental moratoriums on evictions and debt collection, as well as voluntary actions in the private sector, helped blunt the need for bankruptcy filings.

“These governmentally imposed prohibitions and private sector judgment calls substantially softened, if not entirely eliminated, the short-term need to spend money on a bankruptcy filing,” he said.

Moreover, the fact that most households in America received a check for up to $1,200—and that unemployment benefits were augmented by $600 per week through July—certainly helped to stop the bleeding of household balance sheets.

The reduction in bankruptcy filings stands in contrast to the previous economic downturn. As the figure below indicates, personal bankruptcy filings began to increase a year into the 2008-09 recession and then continued through the first years of the recovery.

Given the recent surge in coronavirus infections, the anticipated increase in health care costs for households and the unwillingness of lawmakers to approve further pandemic aid, the projections for a tsunami of personal bankruptcy filings beginning in 2021 are not unrealistic. 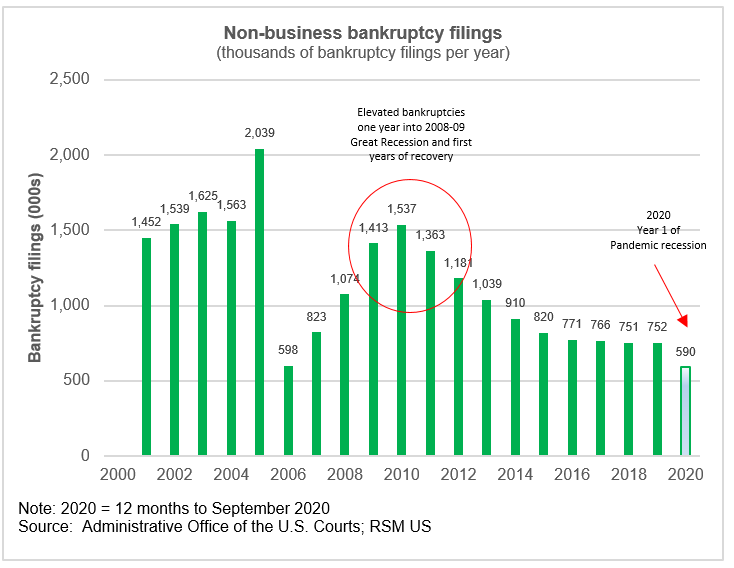 Then there is the commercial side of the bankruptcy equation. Despite some filings by big-name retailers, bankruptcy filings for businesses are about 1.5% lower this year than the average of 22,000 filings per year from 2017-19.

Stein said that business bankruptcies are different from personal bankruptcies as they seek to address some common issues, such as: 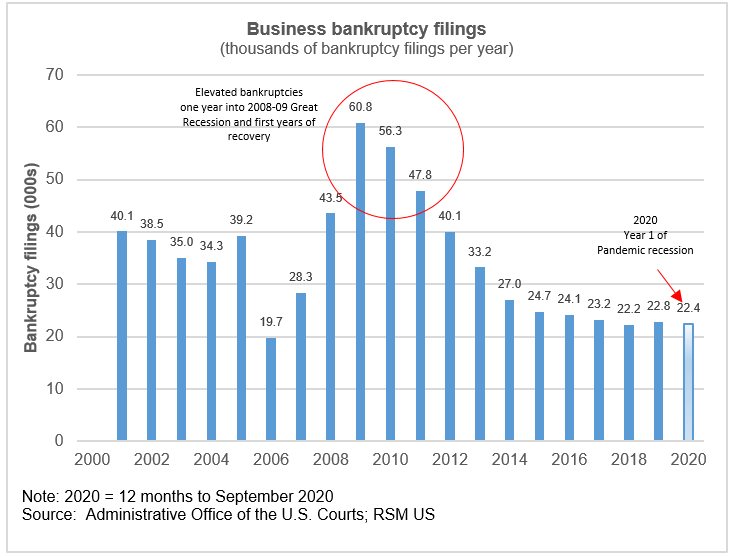 Stein added that retailers and restaurants—those businesses most likely to be immediately affected by the pandemic and economic collapse—often look to bankruptcy as a way to get out from a burdensome contract. For example, a restaurant might need to walk away from an expensive lease. But that threat, he noted, might prompt a landlord to renegotiate if there is no better alternative.

Negotiations like these have, one by one, managed to keep the lights on for more retailers and restaurants than otherwise could be expected. But time may be running out for many of these businesses as restrictions on economic activity are imposed again and as federal aid expires.

The assessment of the legal community is that bankruptcy filings from small companies are already increasing to go along with filings from JCPenney, Brooks Brothers and many others including, most recently, the Friendly’s restaurant chain. Shedding or restructuring untenable debt is advantageous for large businesses hoping to be sold and then continued under a reduced debt load.

As with all the uncertainty surrounding the pandemic, the decline in bankruptcies might be because of a wait-and-see philosophy by all constituencies—hanging in there until we know for sure when or if a vaccine will be available and when or if lawmakers will attempt to rescue small and midsized businesses.

For more information on how the coronavirus is affecting midsize businesses, please visit the RSM Coronavirus Resource Center.