A receivership is often labeled as the state court’s version of bankruptcy, though there are many differences between the two. The device of receivership is primarily a creditor’s remedy and is typically invoked in various circumstances including the collection of a money judgment, liquidation, and managing assets. A creditor is typically the party requesting the court for appointment of a receiver and the lender is the respondent in the case and whose property is being subjected to a receivership. Because of the fundamental nature of a receivership, the imposition of a receiver is more prevalent during periods of economic recession and depression including the Great Recession of 2008. Not surprisingly, and seemingly in response to the Great Recession, Minnesota revised and enacted an updated receivership statute in 2012 which can be found at Minnesota Statutes sections 576.21-576.53.

The Life of the Receivership

The inception of a receivership begins when a party in a suit, typically a creditor, brings a motion to appoint a receiver. Thereafter, the receivership is established when the court grants the motion. It is generally within the discretion of the court whether a receiver is appointed—but where a creditor is seeking a mortgage foreclosure—the court must appoint a receiver after the creditor moves for one. A receiver may be appointed to enforce a prior judgment, preserve property pending an appeal, as a creditor’s remedy, or in all other cases, under the general equity powers of the court. The party seeking the receivership will recommend a receiver, and a court will generally appoint the recommended receiver if the recommended person or entity is qualified and independent. Accordingly, the court will examine whether the recommended receiver is independent from the parties in the underlying litigation and has the sufficient experience and knowledge to adequately manage and control the receivership property in question.

Limited Versus General Receiver and Their Respective Powers

A. Both Receiver’s Powers

B. The Power to Sell Free and Clear of Liens

In conclusion, a receivership is different than bankruptcy in many respects. However, a receivership is a powerful tool afforded to a creditor, especially when management over collateral would be beneficial during the pendency of an action relating to debt collection or foreclosure. 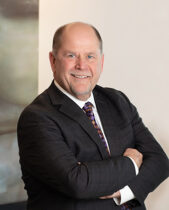 Raised on the family farm near Appleton, Minnesota, Mike understands the importance of hard work and dedication and takes this approach in his law practice. After serving as a law clerk for the retired Honorable Gregory F. Kishel, United States Bankruptcy Judge, Mike’s roots and love for rural life—and his extreme dislike for congested traffic—brought him to New Ulm, where he has been practicing law with Gislason & Hunter ever since 1993.